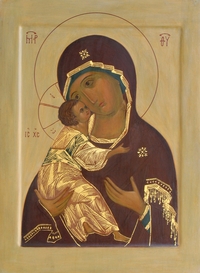 Jana Baudišová was born in 1962 in Prague. She graduated from the Prague grammar school Na zámečku in 1980 and obtained an engineering degree from the Czech Agricultural University in 1984. She was christened orthodox in 1986 with her hudband Jan and son Petr. In 1990 she made a three month study visit in the monastery of st. Kyriak and Juliet in Greek, studying the technique of Greek iconography. In 1996, she obtained a Masters degree at the Orthodox Theology Faculty in Olomouc and Prešov. In 2004, she made a one month study visit in Russia on the Icon school of Moskow Ecclesiastic Academy in The Trinity Lavra of St. Sergius, studying the technique of the traditional Russian style of icons. Since 1990, she has been living with her family in Jihlava, by the Orthodox Chapel of St. Wenceslav and Ludmila (with her hudband a priest here). In 1999, their daughter Taťána was born here. Aside of taking care of her family and the parish, she translates church literature, lectures, writes icons for both churches and personal ownerships and displayed her icons on various exhibitions.

Few words of the author about the spirit of iconography

When I learned how to write icons in The Trinity Lavra of St. Sergius in Russia, the teachers led us to choose good quality references for our works. They meant middle-age icons, which are top works in iconography. Icons bear archaism in themselves, just like the liturgic language. Similarly to the language, they express ancient Christian devotion to us, the people of present, over the lapse of ages. While in the case of the language, excessive archaism can be an obstacle in understanding, it is not like that in the case of icons, because we perceive them directly by our vision. The icon is not just a realistic expression of the appearance of Christ and displayed saints, it is also insipired by God. In the middle ages, the monks hesychasts , who saw God, were making His honour. This reflects in the spirit of the ancient icons, in their depth, in their way of expression of transformed mankind, in the edification of shapes of depicted people and things to their appearance in the Kingdom of God. Even the contemporary iconographer must take part in the God's act of grace, so that his icons could express the message of Gospel good news about the salvation of man. Even the first icon made by a person's hand was made by the evangelist Luke after the descent of the Holy Spirit on the apostoles. That's why each iconographer should live in prayers, receive Eucharist and use the original icons of monks-hesychasts as the refrence for his work. Then also his icons can be deep and calm and the faces of the saints are submerged in the contemplation of God and His mystery.

Back to the main page